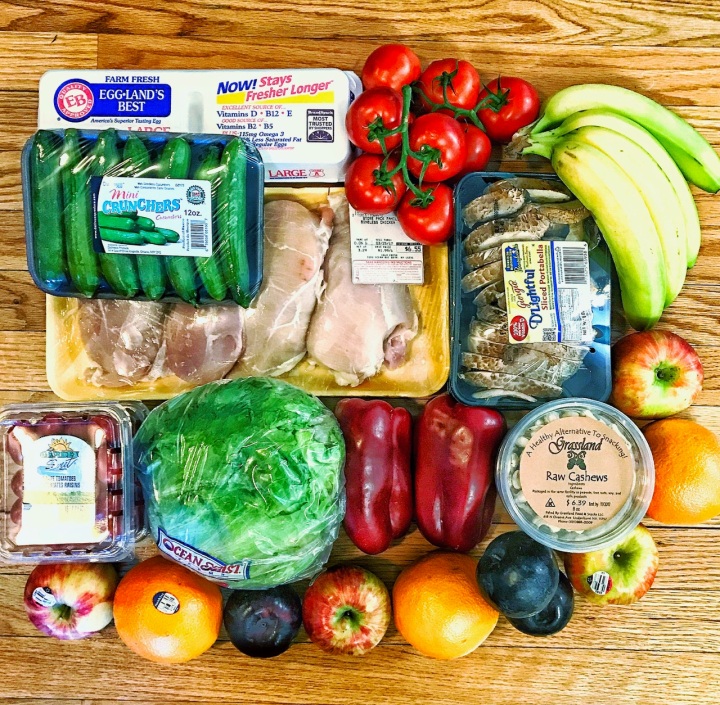 “Don’t you get tired of eating the same thing every single day?” is probably the number one question someone will ask me once they realize how extra I am about prep.  The truth is, there are a lot of common misconceptions about meal prep, and it’s not nearly as difficult or boring as it’s made out to be.  Sundays have actually become my favorite day of the week because I get to catch up on my Well+Good emails (one of the only email subscriptions I actually read), bookmark some cool new recipes and food trends, and plan out my week.

I started meal prepping when I was an intern at my now full time employer, after quickly learning that the ‘go out and buy lunch with the team every day’ lifestyle wasn’t going to work for me.  It started with just lunches, then I slowly started incorporating breakfasts as well.  Fast forward one year to full time employment during my first busy season, and meal prep included breakfast lunch, dinner, and every snack in between.  It was definitely daunting at first, sometimes overwhelming, and consistently time consuming.  But now, after almost three years of experience, the process has become way more efficient and hardly feels like a chore anymore.  It didn’t take long to get to this level of efficiency, and anyone can do it!  This is going to be a long post, so I’m going to split it into three parts:

“Don’t you get tired of eating the same thing every single day?”

I love food.  You can ask basically anyone who’s met me more than once – I am the type who lives to eat, not eats to live.  The idea of eating the same exact thing for every meal every day is an absolute nightmare.  Don’t get me wrong, you’re going to be repeating meals and foods, of course.  But prep doesn’t mean filling ten containers with the same exact spread of rice, grilled chicken, and baby carrots.  That said, this question makes the bold assumption that I eat the same thing day-in and day-out, which I definitely don’t.  What I generally try to do is prep two different meats (generally chicken and a fish), and two different veggies.  I don’t box all of my meals for the week on Sunday, but rather I throw all of the like items in separate containers, and box my lunches every night for the next day.  It doesn’t sound like much, but having the option every night to mix and match makes a huge difference.  Also, I always keep salad fixins in my fridge, so that’s basically a third veggie option to add to the rotation.

“Do you ever go out and have any fun?”

Seriously, these are the things people ask me.  Yes, I go out.  Yes, I have fun.  Yes, I can be spontaneous.  For me, one of the benefits of prepping my meals is that I then have the flexibility in a social setting more than if I had wasted most of my macros for the day on an unnecessarily high-cal lunch.  A lot of purchased meals are full of fats and carbs that can be easily avoided and recycled on something more fulfilling.  Even salads can be deceiving!  (Check the nutrition facts of that Chop’t salad before landing on Chop’t as a healthy lunch option at work).  By making your own lunches (and bfast and dinner), you are controlling exactly what you’re putting into your body, which is ideal for anyone who has fitness and general health goals.

How do you get enough food on Sunday to last the whole week?

Ok, this question is very valid.  Generally speaking, my cooked chicken or turkey lasts all week without any problems.  If I prepare fish, I will either freeze it to have later in the week, or eat it all within a couple of days of preparing.  Cooked veggies typically last about half the week, so I try to finish those up by the end of Wednesday.  I also usually buy additional veggies that last the full week (aka my salad fixins, alluded to above), like peppers, tomatoes, and cucumbers, so that I can use those once I’m all out of cooked veggies.  Fruit all has differing shelf lives, so I typically eat the more time sensitive fruits earlier in the week (blueberries, strawberries), and save the more resilient for later in the week (bananas, apples, citrus).  It also helps to have things like Greek yogurt, nuts, protein powder, oats, and nut milk on-hand for a quick and satisfying meal in a pinch if all else fails.

Figure out a technique you’re good at and stick to it.  Don’t reinvent the wheel every week.  Are you really comfortable with baking your chicken in the oven?  Using a slow cooker?  Grilling it on the stovetop?  Do that every week then.  Obviously you can vary it up sometimes, but by doing something consistently that you are most comfortable with, you will become exponentially more efficient.  The variety in your prep comes with how you season your food, not necessarily the technique you use to prepare it.

Know your kitchen appliances, and make sure you have the proper gear.  I love to make my own nut butters, as well as baked goods as treats for the week, so staple appliances that I use every single week are my KitchenAid hand mixer and food processor.   I also recently got a Black + Decker slow cooker that I absolutely love.  It’s so important to have the proper tools in your kitchen if you want to conduct an efficient prep.

Have your grocery list planned out well in advance, and stick to one main grocer.  I have a note in my phone dedicated to prep ideas and my grocery list that I am incrementally adding to all week.  I have a list of staple items that generally don’t change from week to week (nut milk, Greek yogurt, eggs), and then a list of ideas that I stumbled on during the week that struck my interest to include in my prep.  Come Saturday or Sunday morning, I usually take these ideas, put the recipes side by side, see which ones have a few  main overlapping ingredients, and that’s how I narrow down my ‘ideas’ list into a list that’s reasonably executable.  Also, try to visit the same grocery store every week.  I fly through my grocery shopping in less than 20 minutes because I basically have the floor plan committed to memory.

Prep officially begins at the grocery store.  The four main categories of necessities for the week are: protein, fruit, veggies, and snacks.  This week, my protein was chicken; my fruits were bananas, apples, oranges, and plums; my veggies were tomatoes, peppers, mushrooms, lettuce, and cucumbers; and my snacks were cashews.  Already in my fridge/pantry were: Greek yogurt, almond milk, limes, and a sweet potato.

The first thing I do is prep my protein, because this generally takes the longest.  This week, I cooked my chicken with tomatoes and portabella mushrooms in my slow cooker.

While the protein is cooking, I prep my veggies and snacks.  This week, I decided to go with salads, so since there were no veggies to cook, I prepped two snacks.  The first was homemade cashew butter.  The recipe for this is literally just blended cashews, and I was originally going to rewrite the steps here, but I enjoyed reading the how-to article that I found so much that I encourage you to read it as well!

My next snack was inspired by the Tastemade Snapchat discover page, and was taught by Jen of @JustEatLife (Twitter) and @JenEatsLife (Instagram).  These candied orange peels were clutch this week, satisfying my sweet tooth in a [possibly delusional] guilt-free way.  Either way, they were absolutely delicious.  Get the recipe here.

And there you have it, a week’s worth of meals.  So, a typical day this week consisted of two servings of chicken and salad; fruit, protein shakes, and Greek yogurt as breakfast/snacks throughout the day; and a few of the candied orange peels after dinner as some dessert.  Easy, right?

Did I answer your questions?  Leave me a comment and let me know!  Head over to my Instagram for even more recipes and advice, and message/comment anything you’d like to see more of 🙂

As always, stay fit and fab all!

Hi! I’m Madeline,  a  Certified Strength and Conditioning Specialist based on NYC.  I’m a born-and-raised Brooklyn   girl    with    an     insatiable passion  for  fitness and bringing the benefit of a healthy lifestyle to all of you! My background is in strength and conditioning, with a focus on proper nutrition to help guide your progress.  There’s so much more to fitness than brutal, boring, and painful workouts, and there’s so much more to nutrition and heathy eating than plain lean protein and vegetables!  Your health goals ARE within reach, and I am so excited to help you achieve them!